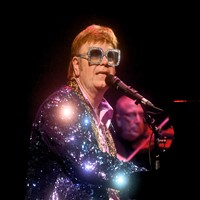 Elton John has elevated to become one of the elite tributes in North America. Hailing from Toronto, Canada, they have headlined over 300 theatre and festival shows in North America. They were the only Elton John tribute asked to play the Elton John convention in Las Vegas where they met the band. Davey Johnstone (Elton’s long time guitarist and musical director) told the band that they were the best 70’s Elton John tribute in the world.  Prior to the performance, enjoy a Family-Style Hot Meal including Penn’s Peak signature Pot Roast.