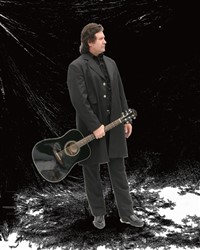 Terry Lee’s Tribute to Johnny Cash has taken him all across the US, Canada, Ireland and the UK.  In 2009 he was selected to provide the moves for the Johnny Cash character in Guitar Hero 5.  Now he’s a regular on RFD-TV too!!!  He looks like Johnny.  He sounds like Johnny.  He moves like Johnny.  Nobody does Johnny Cash like Terry Lee Goffee.  Among the 34 songs included in the tribute are Cash classics as: “A Boy Named Sue”, “Sunday Morning Coming Down”, “I Walk the Line”, “Ring of Fire”, “Folsom Prison Blues” and “Hurt”.  Prior to the performance, enjoy a Family-Style Hot Meal including Penn’s Peak Signature Pot Roast.